Confederate Brigadier General Richard Taylor, the son of a U. S. President, deployed his brigade in line with his left at Prospect Hill and his right continuing along a long ridge which trailed to the east. The unsuspecting town of Front Royal lay before them. The 1st Maryland Infantry, CSA, along Major Roberdeau Wheat’ s Louisiana Tigers, were placed in the advance to lead the attack. When the order came to move forward, the two regiments bolted for the town.

The companies “commanded by Captain Nicholas, Herbert, and Goldsborough were deployed as skirmishers” to lead the assault. “We approached the town rapidly, and entered the main street before the enemy were aware of our approach. For a minute they resisted our advance, and a sharp exchange of musketry shots ensued. They were quickly driven out, however, with the loss of several in killed, wounded and prisoners.”

Lucy Rebecca Buck, who was the daughter of a property-owner in Front Royal, remembered the initial collision between Union and Confederate troops at Front Royal. “Going to the door we saw the Yankees scampering over the meadow below our house… By this time some scattered parties of Confederate infantry came up and charged their ranks, after firing one volley they wheeled about–every man for himself they scampered out of town like a flock of sheep–such an undignified exodus was never witnessed before.”

Through the smoke and chaos of the fighting, Captain William Goldsborough was well aware that he was fighting against his neighbors and fellow Marylander’s. Up ahead, though, he discerned a Union soldier. William demanded surrender. When the soldier turned towards him, though, he recognized the man. It was his brother Charles. Believing that the situation could have but one acceptable resolution, though, Charles surrendered to his brother.

Map of the Battle of Front Royal. Map By Nathaniel Michler

The Battle of Front Royal is noteworthy in that the 1st Maryland CSA was thrown into combat against fellow Marylander’s of the 1st Union Regiment of Maryland Volunteers. This would be the only time in the military history of the Civil War that two regiments with identical numerical designations, from the same state, engaged each other in battle.

Bradley Johnson, the commander of the 1st Maryland, CSA, during Jackson’s 1862 Valley Campaign, was a native to the state of Maryland. He had not attended West Point, but had received his education at Princeton. He read law with William Ross of Frederick, and finished his legal degree at Harvard. He was admitted to the bar in 1851.

When the war began Johnson organized and financed a company of soldiers at his own expense. In May 1861 some five hundred Marylander’s assembled at Harper’s Ferry, Virginia, under Johnson’s command. These eight companies would become the 1st Maryland Confederate Infantry. 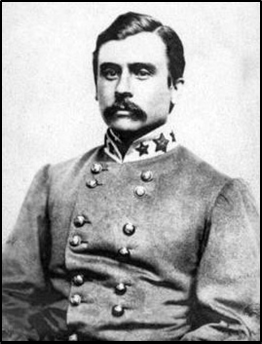 When the 1st Maryland Infantry Regiment, CSA, was mustered into service on June 16, 1861, Colonel Arnold Elzey, a career officer in the regular army, would be the first official commander. His executive officer, also from Maryland, was George Steuart. Steuart would later be distinguished as “Maryland Steuart”, to singularize him from the famous cavalry commander, J.E.B. Stuart. At the time of the Battle of Front Royal, however, the 1st was being directed by Colonel Bradley Johnson.

The 1st Maryland Union Infantry’s first commanding officer was Colonel John Reese Kenly. Kenly was a Baltimore attorney who had been admitted into the bar in 1845. He had some combat experience having raised a company of volunteers and served in the Mexican War as a lieutenant. He served with distinction and was later promoted to major.

With his victory at the Battle of McDowell on May 8, 1862, General Stonewall Jackson was determined to deal decisively with General Nathaniel P. Banks’ army. Having retreated down the valley from Harrisonburg, and having reduced the size of his army by half, Banks was left defending a twelve-mile line, stretching from Strasburg to Front Royal. In an effort to destroy Banks, Jackson decided to strike his weak eastern flank at Front Royal. The town was only defended by about a thousand soldiers commanded by Colonel Kenly.

On May 21, Stonewall Jackson’s command marched into New Market. Instead of marching North on the Valley Pike to confront Banks army directly at Strasburg, he dashed east through New Market Gap in the Massanutten Mountain into the Page Valley at Luray.  There he joined with troops under General Richard Ewell. Jackson’s newly reinforced army of nearly seventeen thousand then turned north, marching along the Luray and Front Royal Turnpike.

Early on the Morning of May 23, General Jackson arrived at Asbury Chapel, three miles south of Front Royal. Here he learned that the town was defended by the 1st Maryland Infantry, USA. Realizing that his army contained the Southern counterpart to this unit, Jackson passed the order to allow this detail the honor of leading the attack on the city. What Jackson did not know, however, was that the members of the regiment were at that moment in open revolt, believing their terms of enlistment had expired. Colonel Bradley Johnson was going to have to give the speech of his life if he was going to get his regiment to obey General Jackson’s order. 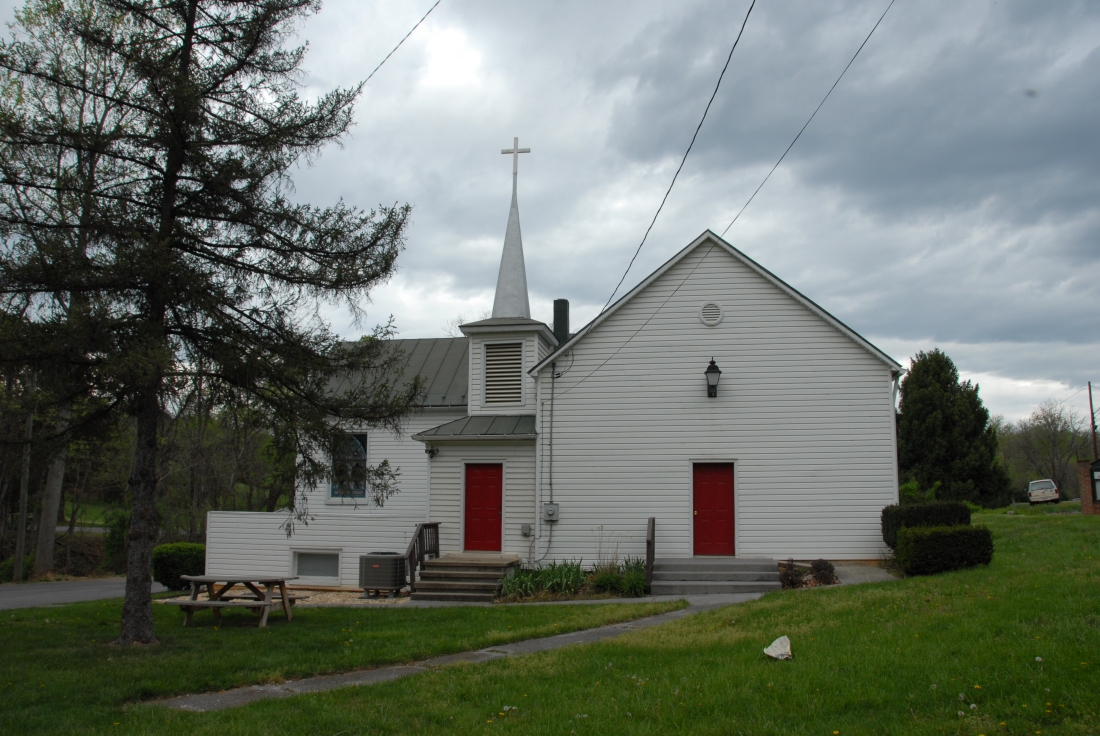 Ashbury Chapel on the road to Front Royal

“You have heard the order, and I must confess are in a pretty condition to obey it. I will have to return it with the endorsement upon the back that ‘the First Maryland refuses to meet the enemy’, despite being given orders by General Jackson. Before this day I was proud to call myself a Marylander, but now, God knows, I would rather be known as anything else. Shame on you to bring this stigma upon the fair name of your native state – to cause the finger of scorn to be pointed at those who confided to your keeping their most sacred trust – their honor and that of the glorious Old State. Marylanders you call yourselves – profane not that hallowed name again, for it is not yours. What Marylander ever before threw down his arms and deserted his colors in the presence of the enemy, and those arms, and those colors too, placed in your hands by a woman? Never before has one single blot defaced her honored history. Could it be possible to conceive a crime more atrocious, an outrage more damnable? Go home and publish to the world your infamy. Boast of it when you meet your fathers and mothers, brothers, sisters and sweethearts. Tell them it was you who, when brought face to face with the enemy, proved yourselves recreants, and acknowledged yourselves to be cowards. Tell them this, and see if you are not spurned from their presence like some loathsome leper, and despised, detested, nay abhorred, by those whose confidence you have so shamefully betrayed; you will wander over the face of the earth with the brand of ‘coward’, ‘traitor’, indelibly imprinted on your foreheads, and in the end sink into a dishonored grave, unwept for, uncared for, leaving behind as a heritage to your posterity the scorn and contempt of every honest man and virtuous woman in the land.”

The 1st Maryland responded enthusiastically to Colonel Johnson’s address, answering General Jackson’s call to action. The regiment was situated near the rear of the column, so Jackson had to wait two hours for the regiment to catch up with him at Ashbury Chapel. Upon arrival they were directed to the right, onto a muddy cross road which connected to the Gooney Manor Road. By following this path, they were able to approach Front Royal from a direction that bypassed the Federal pickets posted nearer the river on the Luray Road.

Johnson’s men swept into Front Royal pushing Kenly’s troops through the town to the high ground beyond. Though outnumbered, Kenly put up a stubborn defense. With the arrival of rebel reinforcements, however, Johnson’s Marylanders were finally able to charge up Richardson’s Hill,  capturing several prisoners while crossing the bridge over the South Fork. Advancing another four hundred yards along the road, they were stopped cold by Kenly’s new line atop Guard Hill, and by the burning North Fork Bridge.

The Thomas McKay House where Kenly’s Forces were Destroyed.

The Marylander’s were soon joined by General Taylor and his Louisiana regiments, who had crossed the South Fork. Kenly withdrew along the Winchester turnpike through the town of Cedarville with Colonel Thomas Flournoy’s newly arrived cavalry following closely behind. General Jackson rode ahead with the cavalry as Confederate infantry began to cross the two rivers.

Upon reaching the Thomas McKay House, about one mile north of Cedarville, Colonel Kenly was forced to make a stand and face his pursuers. Deploying his remaining infantry across the turnpike, he braced for impact. Flournoy’s Confederate cavalry swept around both of the Union flanks. Panic ensued as Colonel Kenly fell wounded, and the Union defense collapsed. More than seven hundred Union soldiers capitulated.

Captain William Goldsborough of the 1st Maryland, CSA, would claim that he captured his own brother. Since the 1st Maryland, CSA, did not advance to the Thomas McKay House, the capture of Charles by his brother could not have taken place at Cedarville. Charles’ apprehension must have taken place during the regiment’s sweep through the town, or at the time of the collapse of the Union lines on Richardson’s Hill.

According to Goldsborough: “nearly all recognized old friends and acquaintances, whom they greeted cordially, and divided with them the rations which had just changed hands”. Regardless of where William captured his sibling, this occurrence is truly the embodiment of one of the war’s most popular themes; “brother against brother”. It was an incident where armed siblings faced off directly against each other in battle. Fortunately for the family, the outcome was much less tragic than it might have been.

Official Records of the Civil War.

View all posts by shenandoahcivilwarhistory